Historians and genealogists have just been given a perfect antidote to the confines and restrictions of COVID-19:  the National Library of Australia (via Trove )is offering access to the Australian Joint Copying Project  – a unique collection of historical records dated between 1560 – 1984  and pertaining to Australian, New Zealand and  South Pacific  history.

Online access to the AJCP gives researchers the opportunity to get down at ground level for a birds-eye view of historical figures, places and events. You can literally find the writings, sketches and maps that were produced as Europeans made their way into the newer landscapes of the South Pacific, Australia and New Zealand.

Records filmed by the AJCP include a diverse range of material from UK Government Departments such as the Admiralty, Home Office, Colonial Office, the Dominions Office held by The National Archives of the UK and County Record Offices as well as personal archives and manuscripts of leading politicians, explorers, scientists, religious and missionary societies, convicts and businesses held by private organisations or individuals.

There are literally thousands of ‘series’ of records in AJCP from major repositories across every county in the UK, and from the big institutions like the  former Public Records Office (Eng) now The National Archives,  to  those private records held in personal home collections.

There some five million records held in the AJCP collection, with finding aids to guide you through.

The PRO part of the collection in particular features the dual Colonial Office and Dominion Office records which gives insight into England’s home and colonial affairs:

The despatches, correspondence, letter books and registers of these two departments comprise almost 40% of the total number of records filmed by the AJCP.

Other departments in the PRO filmed by the AJCP include: Admiralty, Home Office, War Office, Air Ministry, Foreign Office, Privy Council, Treasury, Board of Customs and Board of Trade.

The nature of the material copied varies from log books and station records (Admiralty) to muster books and pay lists for British regiments stations in Australia (War Office), diplomatic despatches (Foreign Office), ledgers and accounts (Exchequer and Audit Department), registers of merchant shipping (Board of Trade) and material relating to the transportation and administration of convicts (Home Office and Prison Commission).

Although private records predominate, the M Series also encompasses some official records, including selections from the archives of the Hydrographic Office, the Post Office and the Ministry of Defence.
Eighteenth-century material consists mainly of maritime records, including logs and journals of most of the early British explorers of the Pacific.
Nineteenth-century records are a particular strength, and include emigrant diaries and letters, convict records, archives of missionary societies, scientific records, and the papers of politicians and officials.

Logs, letters, government decrees are some of these  documents that give you a chance to find out what was happening in the colonial past.

In just a couple of hours I spied original documents, petitions and letters from the first convict settlement through to major events like the Eureka rebellion.

Finally we get access to Cust54 – records from the 1820’s relating to the setting-up of the Customs bureau in  the formative European settlements in NSW, Vic, Tasmania, including appointments and dismissals of officer, designation of official ports and their bond stores, and my favorite at the moment – investigation into smuggling breaches.

You can original records relating to sealing, whaling and ships registrations from vessels that were sometimes seeking to breach official registration protocol (and especially those in the NZ – AU arena).

There are letters like that dated 1912 from one man in England who had possession of bone implements taken from near Killarney in Victoria’s South West which he was sending to fellow enthusiast.

And records showing the documentation of lists of words – and their meaning from tribes of Aboriginal peoples around Australia –  from Port Essington 1803 and onward.

As well as documents and letters from the Aboriginal Protection Society which show even then the impact of European invasion upon the First People of our nations.

Detailed descriptions and digitised images of all records filmed by the AJCP are available through online finding aids. Specific searches on collections, personal, family and organisational names and subjects can also be done through Trove.

Use the ‘Search’ tool to being your research journey. And  finding aids to navigate around the suite of records on AJCP.

Use broad terms in the ‘Search’ tool (I typed in Sheedy and found only 2 references in the collection – but one of those was actually to a Rev Sheehy, not Sheedy).

If you are researching an ancestor with a particular affiliation (religious, political etc) if you don’t find his/her name pop up in the search tool then broad your terms (look for ‘Chartists’ if that is what you are researching, you may then find your specific person in  a collection of records whilst his individual name doesn’t just pop up when using the Search tool).

According to AJCP the project to digitise the content of the AJCP microfilm will be completed by the 30th June 2020. Content is released monthly and a summary is available on the project news page.

The only downside is I won’t live long enough to read them all. 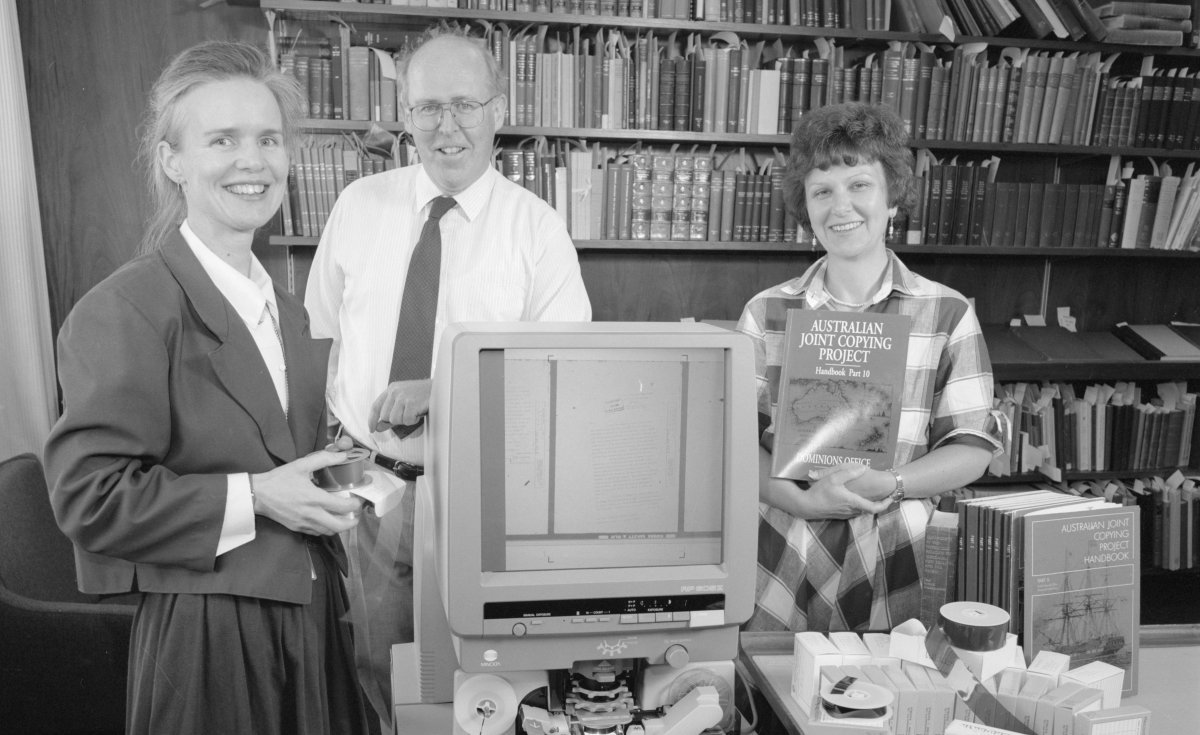 The Australian Joint Copying Project (AJCP) started in 1948 as a partnership between the National Library of Australia, the State Library of New South Wales and The National Archives of the UK. The AJCP identified, described and copied records relating to Australia, New Zealand and the Pacific held in hundreds of institutions, organisations and homes throughout the United Kingdom.

The aim of the AJCP was to copy records held in the then Public Records Office, London relating to Australia. In later years, the geographic scope of the project was extended to encompass New Zealand, the Pacific, and most of South East Asia and Antarctica.

The project spanned almost fifty years. Filming began in 1948 and finished in 1997 producing 10,419 microfilm reels capturing an estimated 5.8 million records dating from 1560 to 1984. All Australian State Libraries were participants at various stages of the project, in different ways. New Zealand joined the project at a later stage through the then, Department of Internal Affairs.